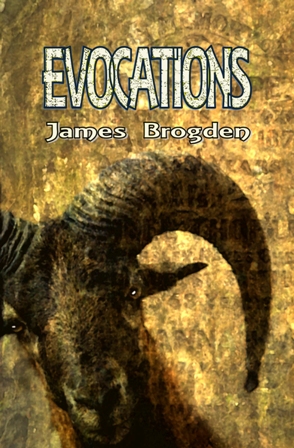 Evocations is available via Amazon and other good book dealers.

Collections of stories by a single author can be tricky, particularly if the stories encompass multiple genres, but this brilliant collection from Alchemy Press rises above any concerns. Brogden is a gifted storyteller and his stories are at their very best when they’re short. And funny. Junk Male tells us the dangers of identity theft, even in jest – who knows what monsters we might create? DIYary of the Dead takes a murderous DIY fanatic and then takes things to its logical and horrible conclusion. The Decorative Water Feature of Nameless Dread… speaks for itself. Oh, and finally – God’s honest truth, dear reader – The Phantom Limb is the scariest and best 700 words I’ve ever read. — Iain M Grant (co-author of Godsquad)

Evocations is really enjoyable collection of stories. I do like my horror and have since I was a kid. I love fiction that unsettles me. The stories in this collection managed to scare, unnerve and unsettle me without resorting to shock tactics like excess blood and gore. Every story was strong and there were none I didn’t enjoyed. I did have my favourites: The Last Dance Of Humphrey Bear, The Decorative Water Feature Of Nameless Dread, The Curzon Street Horror and Mob Rule. I highly recommend Evocations. — The Booklover’s Boudoir

Well written collection of stories which are hugely entertaining and a good insight into what a good writer James is. Humour and spookiness abound. — M King (on Amazon)

Evocations is the debut short story collection from horror writer James Brogden. The majority of stories in the compilation have been published in various anthologies, such as Den of Eek, Dark Horizons and The Big Issue, so this collection serves as Brogden’s greatest hits. And the stories really are great. I have previously compared Brogden to Stephen King and this has never been more evident. His stories share King’s trademark for taking a high-concept bonkers idea and grounding it in the everyday so it becomes utterly terrifying. Brogden treats us to malevolent paint blisters, the Christmas spirit incarnate and a toilet-dwelling octopus.​

Brogden also shares a talent for delivering inspired pieces of ​flash fiction, which makes this collection ideal for commute-occupying digestion. The Gas Street Octopus and chilling opener The Phantom Limb are just a couple of short pages but will stay with you for years.

Brogden is surely one of the only published authors to be specialising in Birmingham urban fantasy. His grudging affection for his city is reminiscent of China Mieville’s relationship with London, albeit with a West Midlands spin. It makes for original, refreshing writing, which deserves to be championed by Birmingham avid readers. — Amazon review (reprinted with thanks)

What factors help us to decide to try a new author? Reviews and recommendations from friends help but I have also found that hearing someone speak and enjoying what they say can be a good (albeit not infallible) pointer to a writer worth investigating. James Brogden is a Midlands based writer who was a guest at the Birmingham SF Group in March 2013. Since that appearance he has published two further novels (TOURMALINE and THE REALT, both published by Snow Books) and this short story collection, EVOCATIONS (Alchemy Press). I must confess that I have not read his novels but have enjoyed some of his short stories in previous anthologies. EVOCATIONS is a collection of sixteen of James’ short stories, most previously published elsewhere with a couple of new additions. The stories all contain an element of the fantastical but are also rooted in the real (and mostly modern) world. Some of the stories also verge into horror.

Based on this collection, James Brogden has an impressive imagination. He is exceptional at taking small everyday elements and transforming them into the bizarre. I also like his use of Midlands locations and how he connects the mythological past with the more “rational” present. His stories also demonstrate a mischievous and satirical sense of humour (including some clever puns) and were one of the things I really relished in this collection. On a minor note, there are no SF stories but that is the only reservation I have about recommending this book to readers. — CDG on Amazon

Advice often given to budding writers is to write what you know about. Not an easy task if the heart of the story or novel is fantasy or horror. More important, perhaps, is to use places that are familiar. Done well, the result is convincing. James Brogden’s first novel, ‘The Narrows’, was largely set in and around the streets of Birmingham, a place he knows well. It is not surprising then that many of the stories in this volume of ‘Evocations’ have West Midlands settings.

‘The Smith Of Hockley’ sees Wayland the smith working out of the Jewellery Quarter in Birmingham. As the story opens he is watching his wife die because figures from his past want to coerce him into forging a sword for them. He uses their demands as a means of wreaking revenge. Across the City, on the Eastside, a mummified cat was found in the walls of all that remains of Birmingham’s other station. ‘The Curzon Street Horror’ explains the ritual that led to its being there.

Meanwhile, the canals that were once the life-blood of the city now harbour sinister denizens. Falling in after dark may lead to the same fate as the reveller in ‘The Gas Street Octopus’. Anyone who knows the M40/M42 junction south of Birmingham at rush hour will have sympathy for the Minister for Transport in ‘The Remover Of Obstacles’. Terry, the victim of circumstance, is given the run-around, chasing his car around the City in search of his car. Birmingham still has its share of tower blocks. In one, a refugee girl’s kindness, despite her dire situation, is rewarded by the pigeon she feeds in ‘The Pigeon Bride.’ To the north of the City lies Sutton Park. The Romans marched through it on the way to York. In ‘If Street’, two boys lie in wait to see the ghosts of the legion passing through. One of the boys disappears with them.

There are times when only a few words are needed to provide an unsettling image. Often, it is just taking an idea and following it to extremes. ‘The Phantom Limb’ is one such vignette. It is a well-known phenomenon that an amputated limb can still be felt. What if that phantom limb can actually grip and pull? In this piece, Alex finds out. ‘Junk Male’ is another such gem. As an urban myth, with both participants coming to a sticky end the veracity cannot be known. It nevertheless is a kind of dire warning: don’t mess with your junk mail! ‘The Gas Street Octopus’ is another example of urban myth.

These are light horror stories, as is ‘The Decorative Water Feature Of Nameless Dread’ where Brogden is having fun with the format of ‘Gardener’s Question Time’ by having a Lovecraftian monster living in a water feature. He is also adept at writing longer, subtler stories. ‘The Last Dance Of Humphrey Bear’ is a delicate and poignant story of a man who is desperately trying to make amends for the mistakes he made and which led to the death of his daughter. It is also a reminder of the fallibility of protective services when it comes to child abuse and the way manipulative adults erect barriers.

In a totally different vein, ‘The Gestalt Princess’ is a steampunk fairy tale. Professor Harcourt made a daughter as a projection, an intelligent hologram. She wanted more and persuaded the Professor’s assistant to help her construct a body.

These and the other stories in this book give a taste of what Brogden can achieve. He is at his best when the story has a horrific element but for those wondering what else he can do, the last piece here is an extract from his novel Tourmaline. — Pauline Morgan, SF Crowsnest