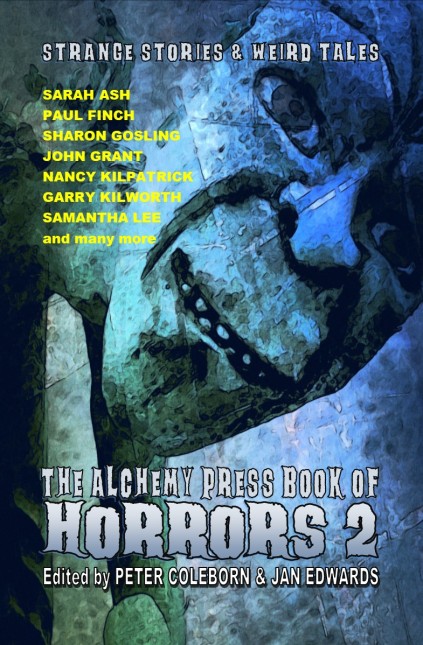 Now available to pre-order from Amazon and other book dealers. The book will be launched at this year’s Stokercon horror convention, held in Scarborough, UK, in April.

Here’s an early peek at the cover for The Alchemy Press Book of Horrors 2, due spring 2020:

Cover art and design by Peter Coleborn. And a reminder of the ToC:

We are delighted to announce the contents for the forthcoming Alchemy Press Book of Horrors 2, the follow up to last year’s acclaimed anthology. Alphabetically:

The Alchemy Press Book of Horrors 2, edited by Peter Coleborn and Jan Edwards, is scheduled for a spring 2020 publication.

Ian Hunter has reviewed The Alchemy Press Book of urban Mythic 2  for the latest issue of Interzone (# 258). It’s a fantastic, complimentary review, one that ends with his asking for volume three. Can’t be bad.

Of Tanith Lee’s story: “…beautifully written and quite, quite shudderingly horrible.”

Of K T Davies’ story: “…opens with some of the best writing I’ve read in a long time.”

Of Adrian Tchaikovsky’s tale: “What is really enjoyable about this story is the voice…”

And of Sarah Ash’s story: “…so well written you hope both of them will get together…”

Urban Mythic 2, along with the first volume, is available via Amazon and other good online stores.

Tell us a little about yourself and your writing.

I love stories. When I was a child, I used to scribble after ‘lights out’ by the street lamp outside my window, filling little notebooks with barely legible scrawl in different coloured crayons. Growing up in Bath, I used to wonder about all the lives lived out from pre-Roman times till the present day and how what happened back then gradually became transmuted into local legend as it was told and re-told through the ages. Which is why what I like to explore in my own writing what would happen, for example, if a rational, enlightened eighteenth century soldier-prince encountered real, raw magic when waging war on the neighbouring country (The Tears of Artamon). I was trained as a musician and taught music for many years and my stories frequently feature musicians struggling with their craft. Kaito, the main protagonist of The Flood Dragon’s Sacrifice plays the flute – and an old song of his clan takes on a special significance as the story develops.

What is at the root of your Urban Mythic story?

A summer holiday in the Jura a few years ago brought us into Courbet country. Frustratingly, the new Courbet museum in Ornans was still being finished then, but we were able to visit a few of the places he depicted in his paintings. It’s atmospheric, tranquil, unspoilt countryside where time seems to stand still. As for La Vouivre, this isn’t her first appearance in my writing! I’m still working on a longer novel in which she is one of the protagonists … but set several hundred years earlier.