Tonight at 7.00 p.m. (UK time) we launch two new books, Talking to Strangers and Other Warnings by Tina Rath and The Alchemy Press Book of Horrors 2 edited by Peter Coleborn and Jan Edwards. Because of the covid-19 lock-down it is an online launch on Facebook.

Tina Rath’s twenty-plus tales exhibit an innate sense of structure that allows for a satisfying conclusion – and often a sting in the tail. These are unashamedly entertaining stories, dark fantasy with a touch of humour, that display a deftness of touch inviting us to enjoy the words on the page. They don’t outstay their welcome or labour their points because they don’t need to – Tina Rath knows how a story works. And they work well. Very well indeed. With an introduction by Gail-Nina Anderson.

We’ll also be showcasing two novellas due at the end of April: Les Vacances by Phil Sloman and A Small Thing for Yolanda by Jan Edwards.

Join us on Facebook here for the event and quiz — there will be prizes! 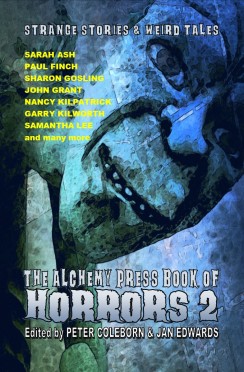 Talking to Strangers and Other Warnings by Tina Rath

The Alchemy Press was intending to launch a couple of titles at this year’s Stokercon later this month. But it is not to be. Alas, Stokercon has been postponed — it’s that cursed covid-19 virus to blame.

And so it’s IT to the rescue. If you are on Facebook pop along to the online launch event and say hello to some of the books’ contributors. There will even be a prize or two… 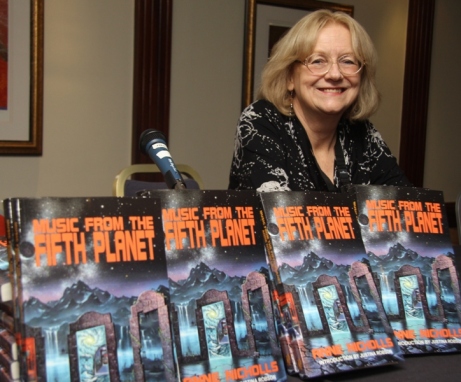 Last Friday at 21:30 hours the book was finally launched! Not in a NASA sense — although cover artist David A Hardy was on hand. And if you know David, you’ll also know that he has painted many super space-related images — check out his website (astroart.org) and you’ll see what we mean.

Were we we? Oh yes: Anne Nicholls’ latest collection Music From the Fifth Planet — packed full with goodies old and new) — was launched at a well-attended session at Novacon 45, held this weekend in Nottingham.

At the same time, NewCon Press launched a new Orcs collection, Tales of Maras-Dantia, from Anne’s husband, the best-selling author Stan Nicholls. There was much wine and cheeriness.

Anne’s stories have also appeared in The Alchemy Press books, Ancient Wonders, Urban Mythic, Pulp Heroes, and Swords Against the Millennium (along with a story from Stan). 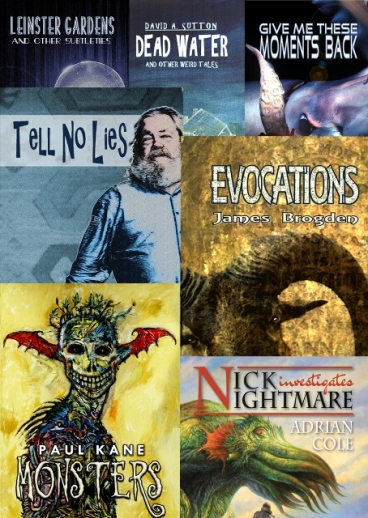 Here we are, coming up to the end of July and as always it is all systems go here at Alchemy Manor. First up is the short list for the British Fantasy Society Awards, which were announced this week. We are tickled pink to see the Alchemy Press nominated in no less than four categories, namely:

Also, Alchemy editors Jan Edwards and Jenny Barber are pleased so see short-listed for Best Short Story ‘A Change of Heart’ by Gaie Sebold, from their Wicked Women anthology, edited for Fox Spirit.

END_OF_DOCUMENT_TOKEN_TO_BE_REPLACED

This is a (relatively) brief reminder of this weekend’s activities. We will be attending Edge Lit 4 (in the Quad in the centre of Derby) selling books and launching two new titles. Not only that, The Alchemy Press is proudly sponsoring the panel “Looking Back – How Much History Does Fantasy Fiction Need?” with Stephen Deas in the chair alongside panellists Joanne Harris, Tom Lloyd, Freda Warrington and Angus Watson. This panel starts at 11.30 am in Cinema 2.

Tickets for Edge Lit are almost gone so if you want to attend visit their website now.

In the afternoon – at 3.15 in the Green Room – we are launching two new collections: Monsters by Paul Kane and Evocations by James Brogden.

New York has alligators in its sewers; Birmingham has man-eating Octopuses in its canals. What sacrifices were offered in order to build the railway? Held captive in a tower-block; can she escape? What does his non-existent hand touch? Roadkill … or something worse? What is it like, waiting to become a ghost? Discover these chilling horrors and many more in Evocations…

When you read Monsters be afraid. Be incredibly afraid … because the Monsters are here! Vampires, werewolves, zombies, witches, this collection from the imagination of award-winning and bestselling author Paul Kane has them all! Including the first reprint of ‘Dracula in Love’ in over a decade, the original short story the movie Weeping Woman was based on, plus an introduction by Nicholas Vince (who portrayed Chatterer Cenobite in the Hellraiser movies and Kinski in Nightbreed) and cover art by the legendary Clive Barker, this is one book you really should be afraid to miss!

Both books will be available as paperbacks. We also have a very limited run of 30 signed and numbered copies of Monsters with which you’ll receive a free DVD of the short film The Weeping Woman based on Paul’s story – printed just for Edge Lit. Any unsold copies will be available via The Alchemy Press after the weekend. The paperback editions will then be available from the usual online dealers, along with eBook editions. 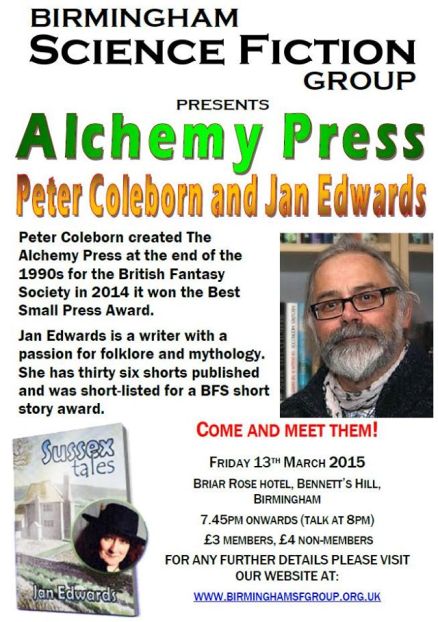 The Alchemy Press’s Peter Coleborn and Jan Edwards will be guesting at the BSFG’s March meeting — see image. Also on hand: Mike Chinn and David Sutton, whose new collections will be launched on the evening.

The Alchemy Press’ Jan Edwards has been busy in the kitchen baking (who needs Bake Off in this house?). She’s made around a hundred special Monstrous Cookies just for The Alchemy Press book launch, this Saturday at FantasyCon. Just to remind you, we are launching: 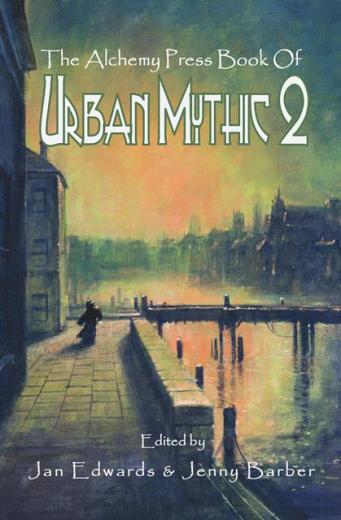 Urban Mythic 2, along with The Alchemy Press Book of Pulp Heroes 3, edited by Mike Chinn, and Kneeling in the Silver Light, edited by Dean M Drinkel, are scheduled for launch at this year’s Fantasycon.

The Alchemy Press is off to Birmingham on Saturday, with a stall at the Birmingham Independent Book Fair at the Ikon Gallery, Oozells Street, Brindley Place, Birmingham, B1 2HS. This is a day-long event (doors open at 11.00 am) and features independent publishers from the West Midlands and beyond. You will be able to buy all our in-print titles including Merry-Go-Round and Other Words by Bryn Fortey.

END_OF_DOCUMENT_TOKEN_TO_BE_REPLACED

Invent-10n by Rod Rees sees its official launch this Friday (13 December) during the British Fantasy Society’s Christmas Open Night (The Elephant, 119 Fenchurch Street, London, EC3M 5BA). The evening’s activities kick off at 7.30 p.m. The event takes place in the downstairs bar — unfortunately there is no wheelchair access.

Invent-10n is available as a paperback via Amazon and other online stores, and from the Press as a limited edition hardcover (100 copies).