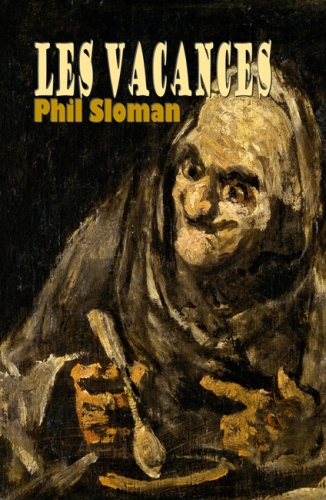 Les Vacances is a novella by Phil Sloman

Sloman’s subtle approach to the horror genre is well known. The British Fantasy Award nominated BECOMING DAVID and the critically acclaimed collection, BROKEN ON THE INSIDE are testament to a writer committed to telling tales with a nuanced narrative, with flashes of violence that are even more potent because of it. With LES VACANCES, Sloman takes on folk-horror as apathetic husband and wife Frank and Elizabeth Dixon hire a gite in a sleepy French village to counter the mediocrity that is their marriage. En route, the couple become temporarily lost. In the confusion, Elizabeth sees the image of a twisted old woman in the road, causing Frank to almost crash the car.

Things get no easier when they arrive at their destination. Lizzie is horrified to find their gite is built near a graveyard where a group of monks, burned alive centuries before, are now buried. To compound the issue, Frank is beguiled by Madeline their alluring host. Lizzie becomes increasingly suspicious about her husband’s flirtatious behaviour, not helped by bizarre dreams of hooded figures carrying torches in the night. These visions become more pronounced and begin to involve Madeline’s unseen mother. What follows is a rapid descent into mistrust and paranoia as the Dixons become enmeshed in the village’s esoteric history, and those who perpetuate it.

… LES VACANCES is an interesting take of the folk horror genre. Sloman uses the concept of alienation to great effect, be that Frank and Elizabeth’s jaded relationship, the inevitable cultural divide that comes with holidays abroad, and the disintegration of Elizabeth’s trust in those around her as the story progresses. This is no more evident than in the bleak finale which will not be divulged here for fear of spoiling the experience for the reader.

There are also darker themes, especially around the Dixon’s dependence on familiarity as a means of avoiding the emotional wasteland that is their marriage. The deficits in their worn-out relationship become markers by which trials are placed upon the protagonists, underscoring where all the faults lie and leaving the reader to question if, had this couple been more cohesive, would they have been more resilient against the forces rising against them?

Again, Sloman has produced a brisk tale of love, loss, and yearning, with a resolute emotional core that is fast becoming his trademark… Overall, LES VACANCES is another solid entry into Sloman’s body of work and, unlike the Dixon’s holiday let, a good place to stop for a few hours.

At a time when families are in lockdown due to the threat of COVID-19 infection and are dreaming of the day in which they will be set free, it seems fitting that Phil Sloman should take as his protagonists Frank and Elizabeth, a couple desperate to escape their humdrum lives and lacklustre marriage. Escape in this instance is to a holiday home – a ‘gite’ – in an idyllic French hamlet.

All seems to be going well until they get lost on the road. Elizabeth is alarmed at the sight of a contorted crone on the road and Frank almost crashes the car. Not the most auspicious of starts to this once in a lifetime holiday, but things get worse when they discover that their rental property is situated on the site where a group of monks had been burned at the stake and buried.

Elizabeth begins to have nightmares about sinister torch-bearing brown-robed figures and begins to have suspicions about Frank when he takes more than a passing interest in Madeline, their attractive hostess. Her dreams become more intense and her fear increases as they appear to feature Madeline’s mysterious mother. The holiday which was apparently sent from heaven quickly descends into hell as Frank and Elizabeth become embroiled in the local village’s dark past which refuses to stay buried.

Les Vacances is a cleverly crafted tale in the currently trending folk horror genre, with well-wrought characters, a slow, careful build and an denouement which, though not totally unexpected given the tragic trajectory of such tales, is nevertheless hugely satisfying. Phil Sloman, whose previous work includes the British Fantasy Award-nominated Becoming David and his short story collection Broken on the Inside, is certainly a talent to watch and, given his literary style, one who, I suspect, will quickly garner even greater audiences worldwide.

There’s a wonderful sense of place created in this novella, along with an atmosphere of slowly mounting dread. The strangeness of the surroundings our holiday-makers find themselves in exacerbated by the language barrier neither have seen fit to overcome.
It’s a slow burn of a story – a major strength of the narrative – with hints and suggestions of what has gone before as well as what waits in store. The denouement may not come as a surprise but that’s not a problem, sometimes it’s the journey, not the destination, which counts and this is a hugely enjoyable journey with some excellent writing… Another great piece of writing from an author to watch.

This is a perfect example of why the Novella length is perfect for horror stories. Sloman is able to build the tension and creepiness without events and character reactions becoming implausible. Several genuinely creepy, claustrophobic scenes raise the goosebumps and the denouement is supremely chilling. Superb.