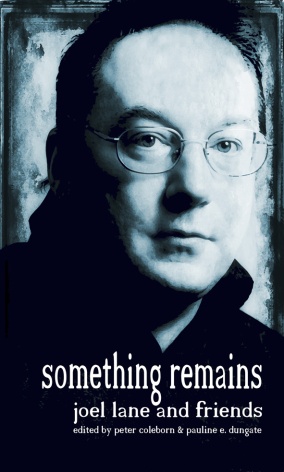 Two contributors to Something Remains — John Grant and Rosanne Rabinowitz — have posted blogs about their involvement in the project. John says:

The hugely talented writer Joel Lane, best known for his dark fantasy, died far too young in 2013. He left behind him scattered notes for a myriad of stories that he’d never gotten around to writing, and it occurred to Pauline Dungate that a suitable memorial to him might be a charity anthology in which other writers used Joel’s notes as the basis for new, preferably Joel-esque stories. I was highly honored when The Alchemy Press’s Peter Coleborn asked me to be a contributor to the anthology, and even more so when my story was accepted.

This unique and moving collaboration differs from any book I’ve contributed to in the past. When Joel Lane died in 2013 he left many handwritten fragments of writing behind. Some were sketches, others closer to complete stories. Peter Coleborn and Pauline E Dungate teamed up to edit an anthology based on these fragments. Various friends and associates of Joel’s selected pieces that sparked their imaginations. Out of this emerged a collection of stories, poems and reflections on Joel’s poetry and critical work.

Read the full blogs on their respective websites: John Grant and Rosanne Rabinowitz.

Something Remains will be launched at FantasyCon by the Sea this September. Many contributors will be on hand to sign the book. The book will also be available from Amazon and the usual suppliers.