John Grant, author of Tell No Lies (The Alchemy Press) has been interviewed recently. The kind people at LitPick, and John, have given permission to reproduce the full interview. LitPick can be found online and on Facebook. And without further ado, here is the interview:

Prolific writer John Grant joins LitPick for Six Minutes with an Author! John is the author of over 70 books, about twenty-five of which are fiction. This award-winning writer was born in Aberdeen, Scotland and now lives in New Jersey.

How did you get started writing?

I must have been about seven or eight when I started my first novel, which was called The Ghost of Horror Mansion. From what fragments remain in my memory, it was every bit as dire as the title suggests. I got about fifteen pages into it, the writing getting larger and larger and the chapters — yes, it had chapters! — getting shorter and shorter. Then I, er, experienced writer’s block.

I wrote half of another novel — a comedy of more orthodox length — while I was at school, and the whole of a full-length novel while at university and immediately after. I finished the latter simply so I could tell myself I’d finished a novel; I knew by that stage it was pretty dreadful.

Thereafter, although I wrote a few universally rejected short stories, I put aside my aspirations to be A Writer for quite a long time, concentrating instead on making a career for myself in publishing, as a books editor. Then, many years later, I found myself suddenly out of work and broke, with a wife and small child to support. The obvious course was to become a freelance editor, but by happenstance I started being able to make something of a living as a writer as well. So for the next couple of decades I did both.

The first book I did in my new, freelance capacity was a collaboration with the late Colin Wilson called A Directory of Possibilities — Colin wrote about half of it, I wrote about a quarter, and we commissioned the rest from others. I was overall editor, and it was in this latter capacity that I couldn’t help but notice how much more readable and fluent Colin’s bits were than my own. I realised that the big difference was that I was trying to be A Writer in all directions while Colin was, in effect, speaking the words onto the page: you could “hear his voice”. So I started trying to do the same and found it worked for me, too. And seventy or so books later I’m still doing it!

Further influences have been pretty diverse. I’ve been a fan since I first read it, many years ago, of Martin Gardner’s Fads and Fallacies in the Name of Science, and that (and his other books) definitely got me interested in the history of science and in the debunkery of false and pseudoscience. That fascination has resulted in a number of books from me, most recently of course Debunk It. In terms of my fiction, there are obvious influences in some of my books: the novel The Far-Enough Window is in effect an homage to the Victorian fairytale writer George MacDonald, while the novella “The City in These Pages” (not, ahem, recommended for younger readers) is a homage to Ed McBain.

There are other authors who I think have influenced me more generally: Christopher Priest, Margery Allingham, Sheri S. Tepper… My strong interests in animation and film noir have played their part as well. To be honest, I’m not sure how evident some of these influences might be to readers, but I can certainly feel them while I’m writing.

Do you have a favourite book?

All of my books are favourites while I’m writing them — well, almost all. After I’ve finished them and the white heat of enthusiasm has cooled a little, then, yes, there are definitely some that I like a whole lot better than others. (That said, no matter how much I like a book, during the period between my sending it to the publisher and publication date, I usually manage to convince myself that it’s dreadful and everyone’ll hate it!)

So far as non-fiction’s concerned, my current favourites are probably Discarded Science, the massive Comprehensive Encyclopaedia of Film Noir (longer than the Old Testament, folks!) and of course Debunk It. In fiction I’d opt for The Far-Enough Window, The Dragons of Manhattan and The World, all novels, and a novella called “The Lonely Hunter”. 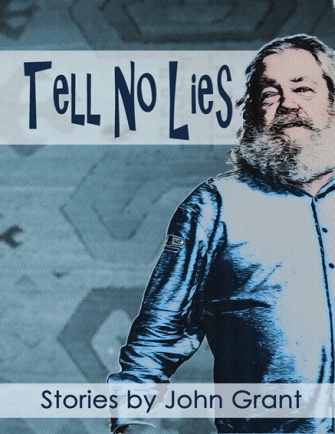 What advice do you have for someone who wants to be an author?

The best answer I’ve ever come across to the related question –“How do I become a writer?” — was that offered by Nora Roberts. From memory, it was: “Apply ass to seat. Write.” While it might seem just a cute retort, I actually think it’s very good advice.

I remember attending a talk years ago by Alec Waugh (Evelyn’s brother) and he gave a response similar to Roberts’, albeit a bit less snappy. He told the audience that the best way to become a writer was to get a stack of paper and a typewriter (you can tell how long ago this was!) and to start filling the blank pages with typing. After a while, he said, out of sheer boredom you’ll start trying to type something that’s interesting, and after maybe a longer while you’ll likely start to realise that you’ve become quite good at this writing thing.

What both those writers were really saying is that it’s no use just wistfully loitering around and yearning to become a writer: you’ve got to actually do it. Even if you never become a professionally published writer — an author — you’ve still achieved a long mile more than the people who never even got started.

As for becoming an author? Well, the first and most important thing to do is to recognise that very few authors can actually make a full-time income out of their writing. Plan to earn your living in some other way.

The second — and far more difficult — thing to do is to harden yourself to rejection. However much you may love the little darlings you send off to editors, chances are a lot of them are going to come thundering straight back to you. Moreover, while often the reasons for the rejection will be rational (“We’re a knitting magazine. We don’t publish science fiction.”), sometimes they’ll be idiotic. You’re not the best person to judge which is which, because you know your story’s a masterpiece. You have to learn to shrug your shoulders, think something like, Well, it’s their loss, and send the story off to a different editor.

Where is your favourite place to write?

I always write in my study, sitting at my desk. I’ve tried taking a laptop with me when we’ve gone on a vacation or a business trip, but it’s always been a complete waste of time: either I never get round to doing any writing or I do and it’s garbage.

Incidentally, I’m perhaps the last dinosaur still to be working in WordPerfect 5.1, an old DOS word processor that I find amazingly quick and versatile. Of course, this means that, whenever I finish something. I have to convert it into RTF or Word before sending it to the publisher, but I still reckon I save myself a lot of time, especially on longer projects, like books. I think I would still be working on A Comprehensive Encyclopedia of Film Noir had I been stuck with using MS Word.

Natch, Microsoft is making it more and more difficult to carry on using WordPerfect 5.1.

Well, obviously that all of my books are best bought at full price, direct from their publishers, and in multiples — you never know when you might want to give those extra copies to friends and relatives!

John, thank you for spending six minutes with LitPick. You’ve provided a lot of good advice including to purchase multiple copies of your books so you always have one on hand! You can read more from John Grant on his websites johngrantpaulbarnett and noirencyclopedia. He is also occasionally active on Twitter as @noircyclopedia and on Live Journal as realthog.

I bought and read Debunk It a few months ago and gave it a succinct but glowing five-star review on Amazon. It really is worth getting hold of and reading. There is so much mis-application of science in the news, especially when politicians get their hands on stuff they seem to barely understand:

This book should be compulsory reading for all people, not just a younger audience for whom it seems to be targetted. Trust me on this and I do mean, trust me. But maybe before you do trust me, go and buy and read this excellent volume that shows you ways to recognise the stories and people that are full of hot air, that are plainly wrong, scientifically (such as global warming deniers) or historically (yes, the Holocaust did happen!) speaking. A fault with these books is that they can become too polemical. Fortunately, John Grant avoids preaching from his soap box; maybe he gets near it sometimes, but only occasionally is there a merest hint of being in a lecture hall. But this is just me being picky. Overall, Debunk It! is a super read that will help everyone to debunk the garbage thrown at us by fools and political manipulators. — Peter Coleborn

Debunk It is available via Amazon and, I hope, local high street book shops.