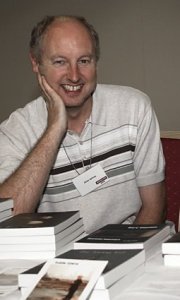 The Great War started a hundred years ago. What is the link between your story in Silver Light and that war?

My story is mostly set in the First World War trenches and, particularly, in No Man’s Land. I studiously researched the story – more on that later.

What concerns did you have when it came to writing your story, how you planned to cover the subject matter? Were you worried that the anthology might have become too much like a regular “horror” book?

My concern was to have a believable underpinning layer of the horror of combat and thus ground the story in historical realism. It’s the First World War, millions died and suffered horribly and there’s no escaping or disguising that fact. However, one must also make an imaginative leap – and I believe that my story does that – otherwise one is simply regurgitating Wilfred Owen, Robert Graves, et al.

As for the anthology becoming too much of a regular horror book, that’s really the editor’s and the publisher’s concern in this instance, not a worry for an individual contributing author. I have been to a few events this year marking the commemoration of the outbreak of World War One and, simply and selfishly, it was my wish and intention to place my story in this Great War themed anthology as my own statement regarding the conflict.

When writing stories what’s your usual arena (SF, fantasy, historical, etc)? Did writing (your story) for Silver Light create difficulties because of the change to the war genre?

My usual arena is Slipstream, which is a descendant of Magic Realism and New Wave Science Fiction. My story is Slipstream with a First World War setting. My story “Somme-Nambula” already existed and all I did was tweak it very slightly when submitting it – spotting one long-standing misspelling in the process, thankfully.

What’s your preferred choice of reading matter? And do you rather go for novels or short stories?

It took me a few years of my reading life to accept that my preferred reading and writing matter is short fiction. I suppose all those years devouring J. G. Ballard should have given me a clue earlier. These days, I love a good themed anthology – either reading it or editing it. There are so many writers that I would like to name check whose work I admire but here are a few: Nina Allan, Brian Aldiss, J. G. Ballard, Kurt Vonnegut, Joel Lane, Doug Thompson, Ralph Robert Moore, Andrew Hook, Megan Kerr … sorry to all those I haven’t listed, I do appreciate all of you.

Which writer would you invite to dinner, and why?

I have met many of my idols. Some of the writers – alive or dead – that I particularly admire might make interesting but also rather awkward dinner guests with their culinary, beverage and illicit drugs tastes. (I’m thinking prime era William Burroughs, for instance). If I were allowed to bombard them with queries about editing, I would perhaps invite Michael Moorcock or Harlan Ellison or Judith Merril. But if I have to just invite one person, I would choose the late Robert Calvert – poet, singer, songwriter, playwright, novelist, best known for his association with Hawkwind. He remains my touchstone and a major influence on everything I do.

What other question should I have asked?

The question that you should have posed is: How much research did the writer undertake? I conducted a lot of research for my story “Somme-Nambula”, gobbling up tomes such as Goodbye To All That, All Quiet on the Western Front, historical books, and, of course, the poetry of Wilfred Owen, Siegfried Sassoon and so forth. A particularly huge influence was Richard Attenborough’s film of Oh! What A Lovely War. I remember seeing this as a kid and the scene that remained with me forever is Brother Bertie singing “Goodbyee” whilst riding a toy train on Brighton Pier. Anyone who’s read my story will detect the influence.

I should note that my story is not brand new so this research took place many years back. “Somme-Nambula” previously featured in an issue of The Third Alternative but the editor Andy Cox moved parts into side bars and generally re-sequencing the novelette. Fortunately, I was able to republish the story in its correct form in my collection Somnambulists (Elastic Press, 2004) and I’m thrilled to bring it to a new audience in Kneeling in the Silver Light.

Anything exciting happening on your literary horizon?

Absolutely loads. My debut poetry collection Dreaming Spheres: Poems of the Solar System written in collaboration with Sarah Doyle was published by PS Publishing and was launched at FantasyCon earlier this year.

I am currently guest editing an issue of the online magazine Sein und Werden with the theme “The Restless Consumer”.

Next year (2015) will see my latest anthology Sensorama: Stories of the Senses appear from Eibonvale Press. Plus on 1st March 2015, I will be opening for submissions for a new anthology Creeping Crawlers, which I’m doing for David Sutton’s Shadow Press. Those are just the tip of the iceberg.