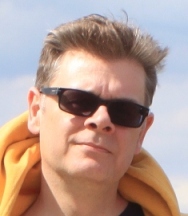 Martin Gately’s “The Sons of Crystal City” appears in The Alchemy Press Book of Pulp Heroes 2.

Please introduce yourself. What inspired your writing and when you began, and – if possible – of all of your published work, which are your favourites (and why)?

I suppose in a roundabout way my writing was inspired by Earl Hamner, the creator of The Waltons – I was heavily influenced at age seven or so by the fact that John-Boy wanted to be a writer. And by the fact that my grandmother assured me that my writing was as good as anything appearing on the kids’ page of the local paper … the inference being that there was therefore money to be made (which there was).

I attempted to enter the world of writing full time in my early twenties, and this is when I did the work of which I am most proud – on DC Thomson’s Starblazer comic. One of my Starblazer stories was illustrated by the great maestro of Argentine comic artists Quiqué Alcatena – a true genius. I had the pleasure of working with him on two further occasions; firstly on the ‘comics novella’ Sherwood Jungle which starred that well known King Features character The Phantom, and also on a one-off comic strip for Fortean Times called “The Cryptid Kid”. This was obviously written in one of my more egomaniacal moments since the strip is hosted Rod Serling-style by a younger version of myself.

Do you have a favourite genre, or sub-genre? What is it that attracts you?

My favourite genre to read is fantasy: Moorcock or Robert E Howard, with Lovecraftian horror running a close second. The attraction with fantasy is, of course, entering a fully realised world. Fantasy is also what I write most easily. However, I have found that you don’t pick the genre, the genre picks you. I seem to have written a lot of detective fiction in the last few years, including two Sherlock Holmes stories.

Some say Pulp is a genre, others a style; which side do you come down on?

It’s some sort of interlocking of both, I guess. The pulps of the 1930s covered many different genres: sport, detective, western, fantasy and SF. Pulp isn’t a comment or expectation on the quality of the writing – don’t forget that Tennessee Williams wrote for Weird Tales. When I think of Pulp now, what first springs to mind are proto-super heroes like Doc Savage and The Shadow. It’s possible to see the influence of those two characters on, say, the Fantastic Four and the Jedi from Star Wars. So Pulp has also been a platform on which other sub-genres (super-heroes and space opera) have been built. I suppose what Pulp was in reality was a colossal market for writers, and what we have now is just some vestigial temporal echo of that.

What was the inspiration for “The Sons of Crystal City”?

Well, it’s kind of an unabashed Green Hornet pastiche – I love the old Green Hornet TV show and in particular the performances of Van Williams and Bruce Lee. Sadly, there wasn’t a big budget Green Hornet movie in the 60s like there was for Batman (the fashion was for high camp and the Hornet was always played reasonably straight) but if there had been perhaps it might’ve resembled this story. The serious aspect to this tale is around the internment of Japanese Americans during the Second World War. While my personal view is that internment was an utter disgrace, it is, arguably, comprehensible as a reflex action in the context of the attack on Pearl Harbor. Less understandable are the modern day apologists who say what fine places the relocation camps were, whilst taking umbrage at any suggestion that they were concentration camps.

Other inspirations include … the anti-Japanese sentiment in one of the 1940s Batman movie serials, Dr Strangelove (of course!) and The Spider – I think somebody once said that in the world of the Spider, every day is like 9/11 – and that was certainly part of what I was aiming for; you are ‘behind the scenes’ on what just might turn out to be doomsday.

Do you have a particular favourite author, or authors? What is it about their work which appeals to you?

My favourite authors are Roger Zelazny and Philip José Farmer, in the sense that they are my writing heroes. I think the Amber series stands out as an extraordinary work of imagination and originality. Jack of Shadows is also excellent. Farmer’s fictional ‘biographies’ (Doc Savage: His Apocalyptic Life and Tarzan Alive) works are another high watermark for me. These are the books which inspired the whole Wold Newton Family concept and sub-culture. Farmer was an incredibly daring writer and books like A Feast Unknown and Blown still have the power to shock. Of his more straightforward novels, Time’s Last Gift and The Green Odyssey are two of my favourites.

Outside writing, what else occupies your time?

My time is spent raising two children who seem to be far more intelligent and better adjusted than I ever was … I wouldn’t be surprised if they took over the World, or ruled the Galaxy as brother and sister, or something.

Is there any particular style of music – or musicians – which appeals to you?

Imagine the musical tastes of Alan Partridge, only slightly worse. I’ll make it easier for you: Geoff Love’s album Star Wars And Other Disco Galactic Themes is on my iPod. The videos I’ve most frequently posted to my FB page are probably I Lost My Heart to a Starship Trooper and the theme to the Logan’s Run TV show (surely one of the most sublime pieces of music ever composed). Earlier in the week I was listening to some Perry Como.

When I am writing, I tend to listen to random movie soundtracks: Ron Grainer’s Omega Man, Jerry Goldsmith, First Blood, Capricorn One; John William’s Dracula and Jaws 2 – these latter two are particularly good because I don’t know the movies that well, so there is no visual interference from them (i.e. I’m not reminded of what’s happening in the movie as I listen). The problem is that I can’t write in total silence, nor with anyone singing, nor with purely classical music.

What are you currently working on?

There are a few things I’ve worked on this year which I’ve mentally filed under ‘too good to be true’ so I won’t inadvertently curse them by mentioning them now. But officially I can tell you that I’m writing a novel for Jean-Marc Lofficier’s Black Coat Press called The Phantom of the Opera in Persia. Jean-Marc also produces an excellent anthology series called Tales of the Shadowmen. I’ve had stories in the last couple of volumes and I’m just finishing off my submission for Volume 10 which again features the French public domain inspiration for Jonathan Creek: Joseph Rouletabille.